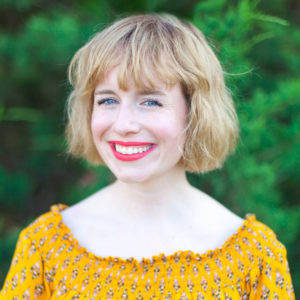 BIO
Kelly Gallagher is a filmmaker, animator, and Assistant Professor of Film at Syracuse University. Her award winning films and commissioned animations have screened internationally at venues including: the Museum of Modern Art, The National Gallery of Art, Sundance Film Festival, the Smithsonian Institution, Ann Arbor Film Festival, Sheffield Doc/Fest, the Cuban Institute of Cinematographic Art and Industry, and Black Maria Film Festival. She’s presented solo programs of her work at institutions including: UnionDocs, the Wexner, Haverford College, UC Santa Cruz, Oberlin, and Sight Unseen, among many others. Kelly enthusiastically organizes and facilitates film workshops, camps, and masterclasses for communities and groups of all ages. ARTIST STATEMENT
I am an experimental filmmaker and animator based in Syracuse, New York. I am primarily interested in handcrafted filmmaking and exploring the ways in which experimental and handcrafted animations make labor visible, aesthetically gesturing towards the workers behind their production. I am invested in exploring the ways in which experimental and handcrafted animation forms and techniques can be utilized to address political inquiries and concerns, and stories of resistance. I am also deeply interested in the ways in which handcrafted animation, in the Walter Benjamin sense, invite authors to be producers, (or spectators to be creators), because of the extreme accessibility of tools employed in handmade practices. Additionally, I am intrigued by the political possibilities of collage and its’ ability to call attention to the mediation of its’ production.

More specifically, I make colorful collage films, experimental videos, and found footage essays that strive to visually explore histories and movements of resistance. For my experimental animation work, I construct paper cut-out collages which I animate on a multi-tiered system of glass panes, utilizing everyday objects and available materials. In addition to cut-out collage animation, I also work with 16mm found/ confiscated footage, 16mm clear leader, oil paint animation, hand-drawn rotoscoping, and any tangible and palpable animation form I can quite literally “get my hands on.” Recently, I have been exploring ways to incorporate my experimental animation techniques alongside live action film. I also have begun exploring digital animation practices in my own work, and the ways in which the work of “the hand” translates through these modes of production.

Thematically, my films often ask questions about topics of left revolutionary history. Other times my films serve as confrontations themselves, resistance made visual. I am interested in both explorations: film as a tool to re-open, re-discuss, re-discover forgotten or untold histories, and film as a tool of confrontation. Several works of mine also explore the deeply personal, and are more essayistic. I believe that film/video and animation hold an important space of potentiality for artists who want to create visualizations of resistance to racism, exploitation, capitalism, imperialism, patriarchy, and colonialism. By creating visualizations of resistance in my films, I seek to offer visual sparks of encouragement and hope to those engaged in struggle. When I first saw radical feminist filmmaker Lizzie Borden’s beautiful film Born in Flames, I felt encouraged by the women on screen fighting back against sexual harassers. I felt connected to them through their confrontations and struggles. Film as confrontation and visualized resistance is imperative for me in my work because by creating visualized representations of a world in which our impact actually ruptures capitalism and systemic patriarchy and racism, we are given the realization that such a world can even in fact exist and that our political efforts are not in vain, but are in fact imperative.

By primarily using tools that are easily accessible (paper, glitter, crayons, paint, markers, magazines, scissors), I also attempt to call attention to form and accessible practices for filmmakers. Creating film/video works that use tools readily available is important to me because I firmly believe culture should be both accessible by all and created by all. This is also why community engagement and organizing film and animation workshops when I can is imperative to me.

My theoretical interests and explorations include: examining the radical potential of film and animation, the feminist politics of handcrafted cinema, and the politics of distribution and accessibility. In Walter Benjamin’s seminal essay, “The Work of Art in the Age of Mechanical Reproduction,” Benjamin states: “The technique of reproduction detaches the reproduced object from the domain of tradition. By making many reproductions it substitutes a plurality of copies for a unique existence. And in permitting the reproduction to meet the beholder or listener in his own particular situation, it reactivates the object reproduced.” Agreeing with Benjamin, I strongly believe that film’s inherent ability to be reproduced and shared among the masses is explicitly why I choose film/video as my artistic medium for political and personal expression and exploration.